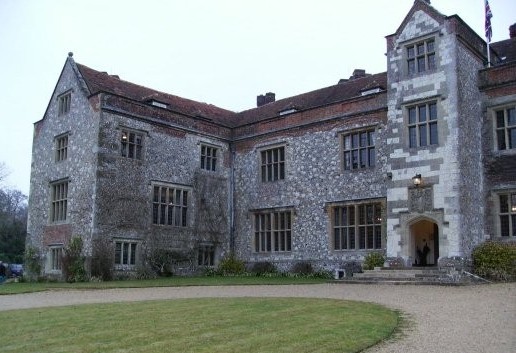 The Jane Austen fandom has been sent into a tailspin following the discovery of a canceled chapter of the author’s most beloved novel, Pride and Prejudice! The chapter was discovered during recent repair work at Chawton House, the home owned by Austen’s brother and often visited by the acclaimed author herself. The manuscript was discovered in perfect condition, hidden in a priest’s hole that had long ago been walled up in the historic home, and has been verified by several handwriting experts and historians as that of Jane Austen. Dr. Leo Ilia Anagrammé, Ph.D., an expert in Austenology, handwriting, and historic documents, stated, “We have extensive original writings from Jane Austen, in her letters and manuscripts, and I am confident that this is an exact match. There is no question! It’s very exciting!”

The manuscript appears to be a first attempt at the epilogue found in the final chapter of Pride and Prejudice. The lost chapter reveals that Austen originally intended a very different "ever after" for our dear couple. Rumors are already circulating that the publisher pressured Austen to change the ending against her will, which explains why she so carefully preserved this manuscript.

In addition, Austen has answered an oft asked question about the identity of one of her supporting characters. Colonel Fitzwilliam is given no first name in Pride and Prejudice, as we know it. To the extreme shock of Austen scholars the world over and mortification of many distinguished fanfiction authors, Colonel Fitzwilliam’s first name was revealed to be, none other than: Darcy. Austen notes: "So far from resolving the confusion created by the colonel’s surname being the same as Mr. Darcy's Christian name, this discovery only exasperated Mrs. Darcy further."

The following is an excerpt from the canceled chapter:


Miss Bingley was so disgusted by Darcy’s choice of wife that her esteem for him completely vanished. That he had lowered himself so far in marriage caused Caroline to lose all respect for him and to be glad of her escape. She never had a wish to set foot in Pemberley again. Instead, she threw herself in the way of a duke of large fortune, impeccable connections, middling looks, and little wit. With such a wife for his duchess the duke shone in society as he had never done before, and all were pleased with his choice.

Pemberley was not Georgiana’s home; the discord between the two sisters was exactly what Darcy had feared and they could not abide living in the same house. The dislike on one side was every bit as fervent as on the other. Elizabeth had the lowest opinion in the world of Georgiana, whom she found to be entirely insipid; and it was soon revealed that she only spoke in monosyllables because she had nothing to say of any wit, intelligence, taste, or consequence. Georgiana, for her part, could not be prevailed upon to approve Elizabeth’s insulting manner and cruel treatment of her brother. After several days’ trial with her new sister at Pemberley, she removed forthwith to Rosings Park, much to the delight of her aunt.

Lady Catherine was extremely indignant on the marriage of her nephew. She successfully brought a case before parliament that proved him incompetent to manage his estate and took full control of Pemberley and its extensive grounds. She immediately commenced a project of unpolluting its shades. Her improvements were so distasteful to Elizabeth that she rather preferred her trips to Longbourn than remaining at Pemberley and spent so much time there that her parents (and in later years, the Collinses) proceeded so far as to talk of giving her a hint to be gone.